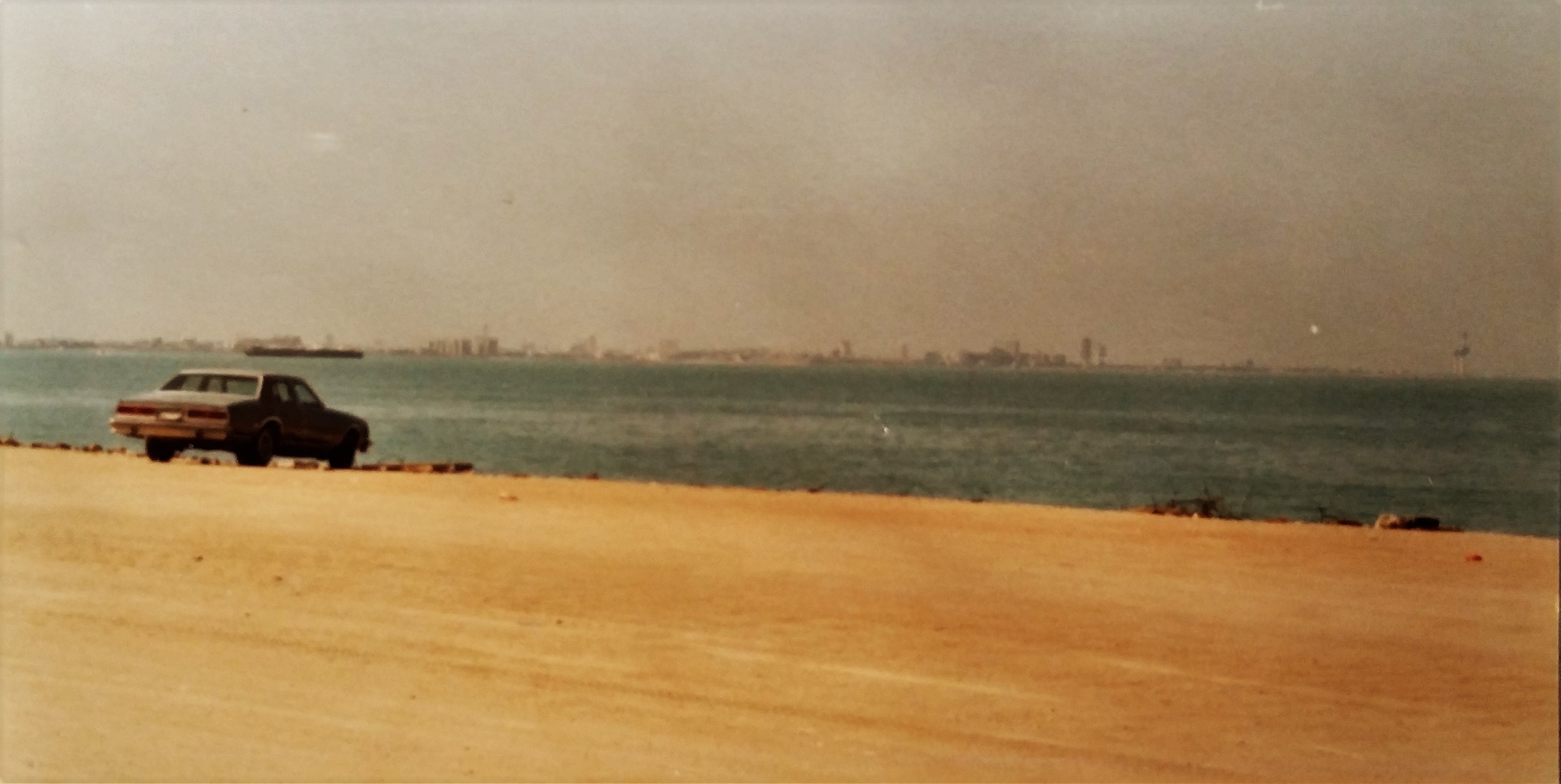 When I was seven years old, I was placed in a special class for the hard of hearing. The class was in a regular school for elementary and middle school children, and usually held no more than ten students. All of us in the class wore hearing aids, underwent speech therapy, and communicated orally, rather than sign language. Most of our courses were held in that class–mathematics, English, social studies, etc., but there were a few courses in which we had to integrate with students in our grade level; gym and family studies, for example.

By the time I was 11, it was decided amongst my teacher, principal, and parents, that I would be slowly integrated into the gifted class–what educators call “mainstreaming.” Slowly, as in I’ll start with one class, then move on to 25% of my education in mainstreaming, and, if necessary, increase my mainstreaming depending on my progress. At first, I was given a special assistant teacher, who accompanied me in my mainstreaming classes. She sat next to me, ensured I was using my FM system, and following along with the lesson plan.

From what I recall, it was difficult being in the mainstream classes. Not because of the hearing difficulties, but because I hated being apart from my classmates in the hard-of-hearing class, who were also my close friends. Being around new students and a new teacher–even if it was only for two hours a day–was isolating at first. Eventually, I made friends. I got close to my teacher. I began to grasp the lesson plans. I no longer needed–or wanted–the special assistant teacher.

The “experiment” in mainstreaming proved fruitful for me. The next year, it was decided, against my wishes, to increase my percentage in the gifted program to 75%. I spent more time in the gifted class than in the hard-of-hearing class. I saw my friends only at recess and lunch; we all lived to far from each other to spend any time after school, or in the weekends. Again, the isolation loomed.

English was my favorite subject. It wasn’t my first language, and only after years of speech therapy, I had begun to grasp its complexities. Reading and writing was an escape. There, I could share, in secret phrases, my feelings of isolation and loneliness. Of living in a world feeling so far apart from every one else, of being trapped in a vortex of thoughts and emotions that I couldn’t find words to share. I was born in Kuwait, and immigrated to Canada. My entire family was in Kuwait, so that separation–worsened after the Gulf War–increased my isolation. I lacked words, many words, to describe this, to share this: to explain over and over again, that I missed everything.

And I missed more in the silence.

Case in point. In grade 7 English, the class was assigned to write an autobiography of their life. I had no idea how to share my world with the class, let alone write down, in a series of chapters, what life was like through my eyes. So I wrote it in third-person, knowing that I was doing the assignment wrong, but unsure how else to do it.

A few days later, my teacher comes up to me in class and asks me if I understood the assignment. I nodded, but refused to provide an explanation of why I didn’t follow the instructions properly. She then turned the pages of my assignment–a series of loose-leaf pages with photos, tied together with blue wool strings. She turned to the page for Chapter Two where I describe, in third-person, losing my hearing aids at age 4 following a serious bout with meningitis:

“After she was realesed [sic] from the hostipal [sic] on the first week of October, Jaipreet’s parents did everything to make her better. They took her to doctors, hoping they would have something to help her hear better. One of the doctor [sic] gave her a [sic] instrument similar to phonic ears. To Jaipreet, they didn’t work very well. She had a hard time hearing with them. When Jaipreet and her family moved to Canada, in 1988, Jaipreet got new hearing aids. For [sic] not being able to hear any sound for a long time, at last there was something that made hear hear all the wonderful sounds around her.”

Then, instead of continuing the narrative, I had separated the chapter with an enclosed heading, “Jaipreet on Sounds,” interviewing myself: 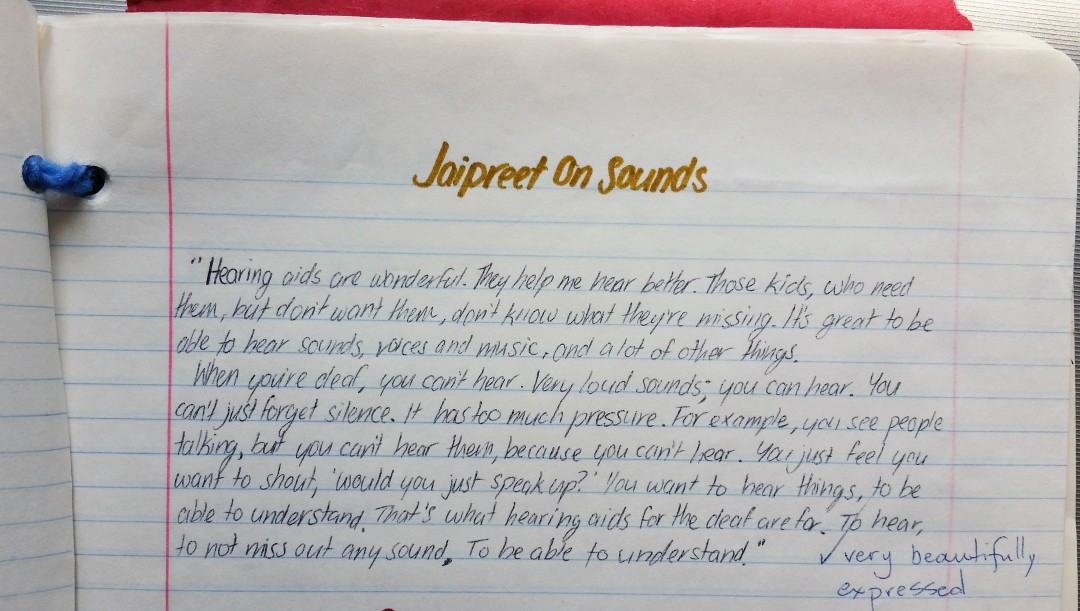 “Hearing aids are wonderful. They help me hear better. Those kids, who need them, but don’t want them, don’t know what they’re missing. It’s great to be able to hear sounds, voices, and music, and a lot of other things. When you’re deaf, you can’t hear. Very loud sounds; you can hear. You can’t just forget silence. It has too much pressure. For example, you see people talking, but you can’t hear them, because you can’t hear. You just feel you want to shout, ‘would you just speak up?’ You want to hear things, to be able to understand. That’s what hearing aids for the deaf are for. To hear, to not miss out any sound. To be able to understand.”

All these years, I kept this little book. I threw out a lot of my school assignments, but this book survived, perhaps as a reminder of my twelve year old self who still exists, who could express herself in ways that perhaps the adult me couldn’t dare to do. I came across this book again today while organizing my bedroom. Tears flowed as I wrote this post, in memories of the isolation and sadness, of being separated from family, from friends. Of being forced to stand on my own, to push myself through the barriers in order to understand.