“Many children have been thought to be mentally very dull when, in fact, they have been partially or severely deaf.”

During my research excursion at Gallaudet University Library, I came across a little green book in the stacks, lodged next to a book that was on my list of materials to examine. Curious, I pulled out the book, and observed the word “R.N.I.D.” in gold lettering emblazoned on the bottom right corner. R.N.I.D, I knew, was the acronym for the Royal National Institute for the Deaf, the largest charitable organization in the United Kingdom catering to the needs of deaf and hard-of-hearing citizens. The organization is now called “Action on Hearing Loss,” having changed its name following the centenary celebrations in 2011. 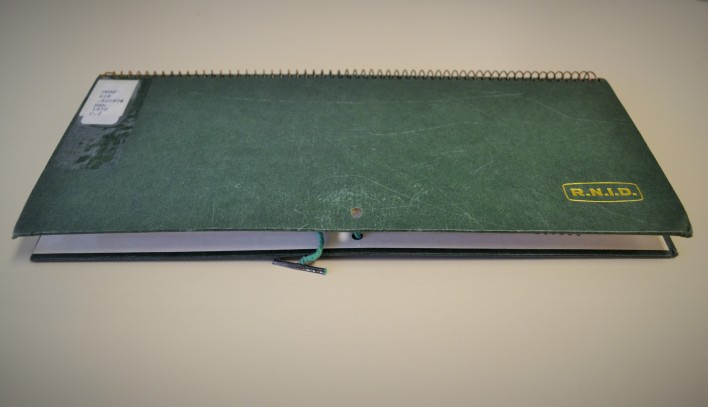 This slim green book opens with an overview of the problems of (mis)diagnosing hearing loss in children. Such problems frequently occur because of a lack of understanding on the effects of distorted hearing or slight hearing loss in children: “If there is a slight loss of hearing for all frequencies throughout the speech range, or severe loss for frequencies above 1000Hz, there will be some disability in discriminating between consonants.”

To solve this problem, in 1960, Michael Reed (1913-1999) devised a hearing screening test that made use of pictures. Reed, who would later become chairman of RNID, designed the test to detect (suspected) hearing loss in children with mental age of 4 years or older. The test contained a set of cards, each set containing four pictures. Before testing a child, it was important to ensure that the child was already familiar with the objects in the pictures and their words.

The examiner was to utter phrases such as “show me the dog,” first in front of the child, as to establish trust and lay out the groundwork for the test. After trust was established, the examiner was then to sit 6ft behind the child, to remove any reliance on lip-reading and strictly test hearing. The same sentence was to be uttered, with the child instructed to point at the corresponding picture.

The “Reed Test,” as it became known, was meant to be simple and detect cases of hearing loss that required further, more in-depth assessment by the audiologist.

Dom Stiles over at the UCL Ear Institute & Action on Hearing Loss library kindly sent me some information on the creator of this hearing test. Michael Reed was a teacher of the deaf and the first educational psychologist in England who worked with deaf children. He worked at the Royal National Throat, Nose, and Ear Hospital (formerly, the Royal Ear Hospital) from 1949-1961, before moving to the Inner London Educational Authority to teach special education to deaf pupils. After his retirement in 1978, he emigrated to Canada. His wife, Mary (d,1984), was also a teacher of the deaf until her retirement in 1977.

More from History of Deafness