Posted in Educational Institutions for the Deaf & 6 Tags

In the late nineteenth century, deafness was transformed into “Deafness,” shifting from a medical affliction towards a cultural category with its own language offering a unique perspective of the world. At the core of this transformation were educators and pupils at residential schools for the deaf. Educators were retrained in new pedagogical framework, adopting the oralist method, which uses speech and articulation as forms of instruction to replace, if not combine with, the manual method (sign-language). And deaf pupils struggled to retain their fondness for sign-language within this fledgling culture that imposed a hearing framework upon them.

What were the experiences of these pupils like as they were taught to understand and interact with a hearing world? How did they perceive their deafness and their own places within their worlds? As many historians have noted, in the residential schools, deaf students created or joined a community that they recognized as their own. This was especially helpful for students in small-town communities in the United States, who often felt isolated and alone, until arriving at school, where they would then interact with other students “like themselves.” And, as R.A.R. Edwards explains, most “deaf children were keen observers of their surroundings.”[i] They saw other (hearing) children communicating easily and wished to be included; they understood literacy could open doors; and they were grasped the significance of political and social events in their communities.

The letters these children wrote home, to their parents, siblings, or friends, provides a unique window for observing a wonderfully rich and colorful perspectives of d/Deaf history. Some of these letters were used by school officials to be inserted into the school’s annual reports to demonstrate the sophistication of their teaching methods and the intelligence of their pupils. Frequently these letters contain ungrammatical sentences and were written without syntax, indicating the writer’s reliance on sign-language as a primary mode of communication. These letters also paint glimpses into the daily lives of deaf children at residential schools: the friendships they formed, their relationships with their teachers, their interests and hobbies, and of course, their views of worldly events around them.

In the Smithsonian National Museum of American History Archives, I came across a collection of letters written by Andrew J. Bates, a pupil at the Pennsylvania Institute for the Deaf and Dumb during the 1880s. This was the period where the culture of d/Deafness was remarkably transforming as battles between oralism and manualism were being played out. The Pennsylvania Institute, which was founded in 1821 by David G. Seixas (1788-1864), a humanitarian concerned with the plight of deaf children, is also rooted in this transformation. In 1881, the Institute opened up a day-school for the purposes of teaching the “pure oral” method: no sign-language, just speech and articulation. This department was segregated from the manually-taught children housed at a different part of the school. The segregation functioned as a pedagogical experiment for the educators, to figure out which method would yield the most practical results. By 1885, the day school plan failed to garner acceptable results, and thus was reformed as a boarding school, known as the Branch for Oral Instruction.[ii] Children were taught by speech alone, but were allowed to play and mingle with the manual children outside of the classroom. 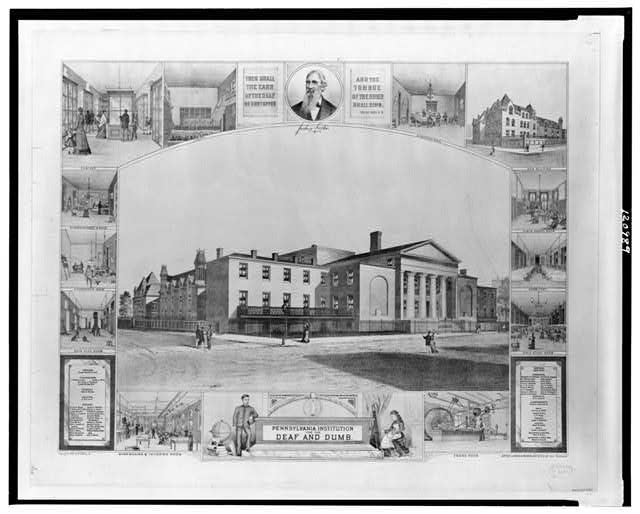 The Pennsylvania Institute for the Deaf and Dumb. Lithograph by James S. Reider, c1880. (Library of Congress)

The letters in the collection date from 1883 to 1890 and are primarily written by Andrew to his father, Jacob J. Bates, who managed a mill in Dryberry, Wayne Co., in Pennsylvania. It’s unclear how old Andrew was when he first entered the Institute, but from the progress of his penmanship, I suspect his earliest letters home were written when he was about 7 or 8 years old. The majority of Andrew’s letters are reassurances to his father that his is “improving fast” in his lessons and that he is being a good boy. But several stories also unravel through the pages which allows us to peek into Andrew’s world at the Institute.

A letter from Andrew J. Bates to his father, 1884. National Museum of American History Archives, photo by Jaipreet Virdi-Dhesi

There’s Andrew’s serious bouts with illnesses. In October 1883, a measles epidemic appeared to have struck several boys at the school. Principal Joshua Foster (1813-1889), the fourth Principal at the Institute, wrote to the parents with updates of their children’s illness. To Jacob Bates, Foster explains the outbreak started when some boys complained of sore throats, including Andrew. They immediately received attentive medical care from the school’s doctors, but the illness was then discovered to be diphtheria. Andrew was struck hard by the disease, bed-ridden for a few weeks, though at times he gained enough strength to sit up, or even to watch the soldier’s parade. While the outbreak was quickly contained and prevented from spreading out through the school, Andrew required extra time to recover. His legs were weakened, but eventually he could walk and run without difficulty. However, he fell way behind on his schoolwork. A year later, in February 1884, Andrew was once again confined to bed with a bout of measles. Again measles threatened the school in 1889, as Andrew writes to his father:

Another disease would later threaten Andrew’s academic progress: in May 1888, an outbreak of smallpox broke out in the school. Four doctors were called to vaccinate all the pupils’ arms.

In the letters, Andrew often asks his father for spending money, or for a box of treats that he promises to store in his closet and not share with the other boys—or sell to them. He requests other things as well, such as specific fruits (pears instead of apples), or “four yellow books” called Reader books. A letter from Joshua Foster to Jacob Bates dated January 18, 1884 indicates that sometimes Andrew wanted boxes and money to “be like the other boys.” Foster writes that Andrew requested him to write to Joshua on his behalf:

“I will tell you just what he wanted me to say. He said most of the boys got Christmas boxes from home—but he received none-and nearly all of the boys have money to spend when they go out on Saturday afternoon, and he has none, and he feels badly about it. …He has plenty of things at Christmas, but they were not from home. He does not really need any money but he sees the other boys come to me on Saturday and get a few pennies to spend, and he does not understand why there is none in the drawer for him.”

And of course, Andrew is overjoyed when a box comes for him, and thanks his father for the kind delivery. One delivery in 1887 included a box with treats, including cakes and apples, and a pair of gloves.

Through the letters we also see glimpses of ordinary boys enjoying themselves at school and around Philadelphia. In 1885, Andrew requests his father to send roller-skates so he can go skating with the other boys in the playroom. The boys also play baseball and go ice-skating during the winter months on the Schuylkill River. They eat strawberries at supper. They cheer on their teachers MR. Dadson and Mr. Zeigler, who represented Philadelphia in a debate with the New York Deaf Mute Club. All the boys celebrated when the Philadelphia club defeated the New Yorkers. They boys take trips in town, viewing the Japanese laying in the Mikado, attending the theatre, and visiting the Zoological Gardens. Andrew remarks on politics, questioning in 1888 whether the Democrats will elect President Grover Cleveland again. A year earlier, he saw many people marching, including soldiers, on Broad Street, and had the opportunity to shake hands with Mr. Cleveland.

Andrew’s letters include notes about the health and affairs of his family and neighbors in Dryberry. He asks his father about the health of his mother and brothers, and expresses his sorrow at tragic news in the family: when his Uncle Lewis killed himself in 1889, when family store-house burned, and when (family friend?) W.B. Arnold died. Andrew also promises to be a good boy and work at the family mill-house during his summer breaks at home. He keeps his father abreast of affairs in the deaf world, inquiring, for instance, whether Jacob was aware of William Robinson, a deaf man in Honesdale, Wayne Co., and writes about a man signing at church:

“I do not think I shall join the Literacy Society for there are too many pupils in the chapel. I remember that you and our friends and I went into Mr. Koehler’s Church. Could you understand him signing about Europe? He said that he visited many deaf boys and girls in Europe they were not very smart. The boys and girls who live in the United States are smarter than they are in Europe but they work very much better than the pupils work here. I was surprised that they work well. Their schools are not like our schools.”

Andrew’s teachers, and the principal Arthur L.E. Crouter, who took over the position when Foster resigned in 1884, appear frequently in the letters. Crouter introduced new life and activity into the Institution, expanding the oral branch to accommodate a hundred pupils, introducing co-education of the sexes, and enlarging the industrial department at the school.[iii] In a November 1889 letter, Andrew tells his father how Crouter introduced the classroom to experiments in electricity:

“Mr Crouter gave us Electricity. Some of us took an electric-shocks. Some of the pupils were holding the electric wire and they put their right hands into a basin of waters to get five cents and they were successful but several of the pupils did not succeed because they were afraid of the electric.”

Not all the boys got along with the teachers. Andrew writes of his classmates’ frustration with a teacher’s failure to explain news lessons properly, so instead of listening to the teacher, the boys “play and talk with others in our class again & again. I think Mr. Crouter will be examination us in our class soon. I think my class will fail.”

The enlargement of the industries department offered the pupils opportunities to seek out career paths. Andrew, who since 1886 appears to have worked at the shoe-shop, even mending his own shoes when the broke, wrote of his frustration with shoemaking in 1887: “I go to work in the shoe-shop every afternoon. I sew the new shoes there. The old shoes made my hands dirty. I like to learn to be a carpenter better than a shoemaker.” He asked Crouter to become a carpenter, and after some nagging, Andrew was moved to the carpenter shop in 1888, much to his delight:

One recurring delight for Andrew (other than the box of treats!) was the newsletter Our Little Worlds. The printing department published two newspapers: The Silent World, disseminated weekly to the hearing subscribers with information regarding the deaf and their education, and general interests, and Our Little World, published daily during the school year for school items. Our Little World was published just for the children and not for general circulation. As Andrew tells his father in an 1890 letter, the teacher Mr. Davidson gave the boys copies every morning and they “are very much interested in reading the news.” Andrew even sent copies of Our Little World home to his parents, begging them to read it and was especially proud when his own inserts were published in the paper.

[ii] H. Van Allen, A Brief History of the Pennsylvania Institution for the Deaf and Dumb (1893).

More from Educational Institutions for the Deaf