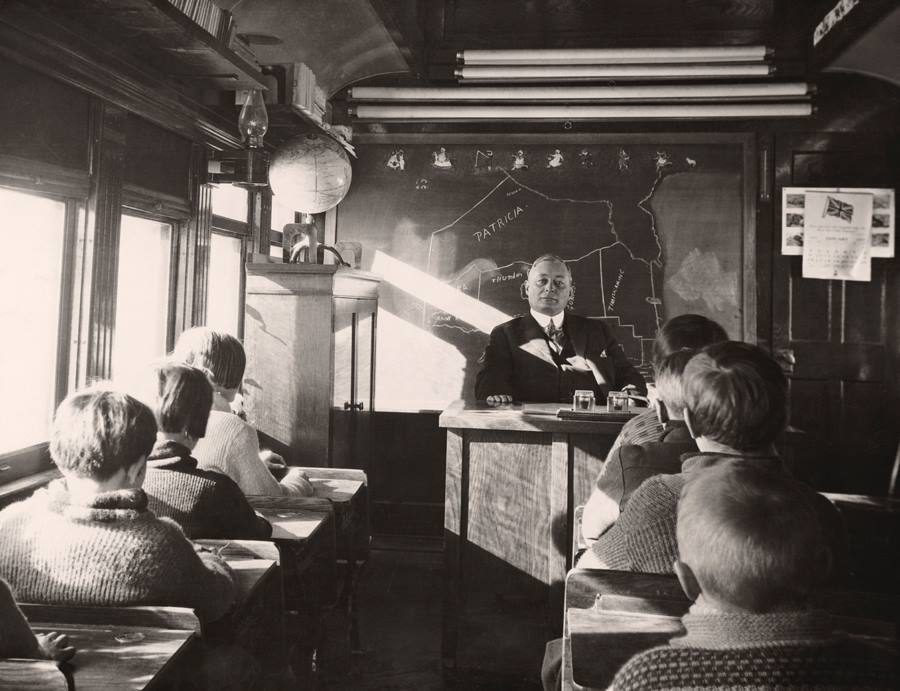 The school bell is no longer a new voice in the wilderness. It is an accept part of the educational system of Ontario. May it continue to ring out its welcome call up the hillsides and through the forest isles of the North for it carries a message of health, hope and power to the remote corners of our Northern heritage.

If you follow me elsewhere on social media, you already know I’m obsessed with the National Geographic photo of a classroom inside a railway car in Ontario, dated August 1932 (above). I knew nothing about this photo nor did the source (National Geographic Photo Archives) provide any context for the photo.

Then lo and behold, while at the Archives of Ontario, I found myself digging through the Department of Education fonds, searching for a particular pamphlet that was listed on the catalogue database. Among the pamphlets I was examining was a memo from the Department of Education dated October 7, 1943, on “The School on Wheels.” The document begins with a discussion of Ontario being the second largest province in the Dominion of Canada and how much of the territory is sparsely settled, providing a challenge for public health and welfare services in terms of accessibility. The school systems were scattered, and despite two transcontinental railway systems and five thousand miles of rail connection, the challenge of reaching schoolchildren in these settlements nevertheless persisted:

The “School on Wheels” was thus a solution to this perplexing problem.

Taking a break from my research, I decided to look up what the School on Wheels was. First devised in 1922 by J.B. MacDonald, the Chief Inspector at Ontario’s Department of Education, the School on Wheels was a project jointly founded by the Department and the Canadian National Railway. It was created as an experiment to provide education to the children living in sparse settlements, mainly where immigrant rail workers were established. About 90% of the children were non-native English speakers.

The interest of the children at their school car almost surpassed belief. Before its arrival their lives were a vacuity. After its advert their powers were liberated; their time was crowded with profitable and well directed activity; they felt the spur of achievement. They had made contact with the outer world of man and things. The school car had touched the mainspring of their lives.

The first teacher hired by the Department of Education was Fredrick Sloman, who served from 1926 until 1964, effectively becoming the school’s longest serving teacher. The Sloman family—Fredrick, Cela, and their five children—even lived on the School on Wheels.

School cars were equipped with 15 desks, slate blackboards, maps, charts, globes, magazines, and a library of several hundred carefully selected volumes. The necessary textbooks, papers, and writing instruments were provided by the Department without expense to the pupils. Children of grades 1 to 8 were taught, though teachers made additional accommodations for older pupils of grades 9 to 12 if required. Even adults wanting to read and write were able to do so. The Slomans in particular, reached out to the settlement communities, providing free meals, medical care, entertainments. Cela Sloman even helped women with writing letters and ordering household goods from stores like Eatons and Simpsons. 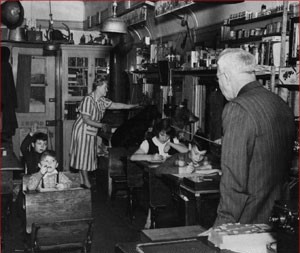 Following the railway routes through Northern Ontario, the School on Wheels was scheduled for six one-week stops at each designated location, where it would remain on location for 3-7 days. Children traveled to these locations—by foot, canoe, on skis, and/or snowshoes. The Northern Ontario Railway Museum and Heritage Center tells a tale of two young boys, aged 9 and 11 who traveled 20 miles by dog sled and then built a small shelter of pine bows to stay overnight in -40 degree temperatures as they waited for the school to approach. The 1943 memo also tells the story of an aboriginal boy who heard about the school and packed his hamper with a week’s worth of food supply and traveled 32 miles downstream to where the school car was stationed—his canoe froze halfway during his trip, so he abandoned it and strapped on his snowshoes!

Once children arrived at the school, teachers provided them with meals and education. They would then provide enough homework to keep the children busy until the school returned in a month. By 1943 (the date of the memo), 7 cars were in operation, four on the Canadian National Railway, two on the Canadian Pacific Railway, and one on the Ontario Northland Railway. When the school cars completed their circuits, they journeyed approximately 2000 miles and provided educational opportunities for over 200 children.

By 1967, the School on Wheels education came to an end. It’s history still remains at the Clinton Railcar Museum, where you can take a tour of the school cars and transport yourself back to the past, back to a time where this was the only educational opportunity for Canada’s Northern children.