I’m beginning a new project on the historical contributions of women to otology, many of whom have been overlooked in scholarship. My current article investigates the physiological work of Dr. Phyllis Margaret Tookey Kerridge, who died on June 22, 1940, the only daughter of Mr. William Alfred Tookey of Bromley, Kent. She was educated at the City of London School of Girls and at University College London; her graduate studies commenced at the latter institution, first in chemistry and then physiology, where she was also appointed as lecturer. She also held posts in the London School of Hygiene and Tropical Medicine, the Marine Biological Association Laboratory at Plymouth, the Carlsberg Laboratories at Copenhagen, and at London Hospital. She received her M.D. from University College Hospital, in 1933 and became member of the Royal College of Physicians in 1937.[1]

During the 1930s, Kerridge conducted experiments to measure the residual hearing capacity of children in London County Council schools, as well as experiments in teaching with electronic hearing aids. Much of her research was on patients at the Royal Ear Hospital, who were tested in the hospital’s “Silence Room:” a 3,500 cubic room in the basement of the hospital’s new building on Huntley Street, with

“walls impenetrable to extraneous noises and which will never reflect, deflect nor refract sounds—a chamber of the stillness of death, where absolute accuracy and complete consistency in results will be obtained.”

The room was built so exact tests to measure degrees of deafness can be made in ideal and constant conditions. Such stillness in this room apparently allowed people to hear heartbeats and the “flick” of their eyelids! A small table and two chairs were placed in the room. There was a bell to call the Porter’s room and an electric fan affixed there as well.

The Committee of the Royal Ear Hospital occasionally granted permission to medical practitioners to use the Silence Room for their own research purposes. For instance, in 1929, they granted the otologist Dr. Charles Skinner Hallpike (1900-1979), a research scholar from Middlesex Hospital, to use the room free of charge. Hallpike is particularly known for his ground-breaking work on the causes of Meniere’s disease (a disorder that causes episodes of vertigo) and for the Dix-Hallpike test for diagnosing benign positional vertigo (sensation when everything is spinning around you). 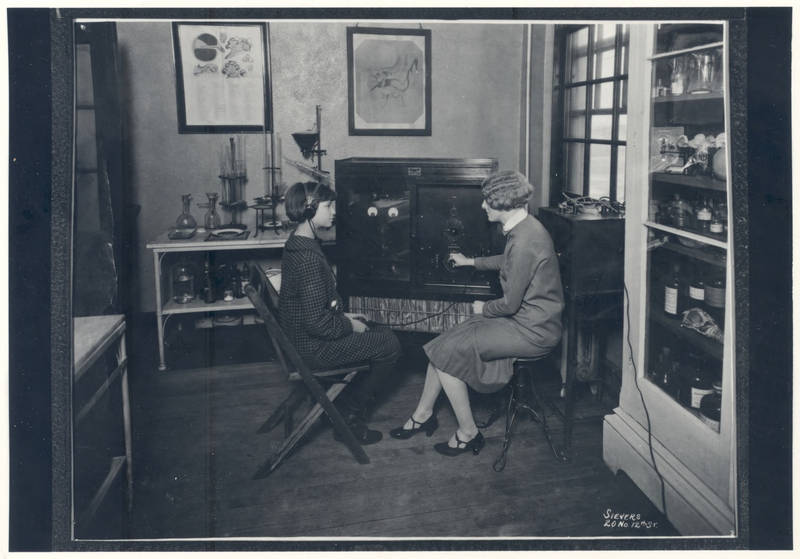 The hospital’s 1938 Annual Reports reveals that Kerridge was appointed to research at the Silence Room, then renamed as the “Hearing Aid Clinic,” working alongside Mr. Myles Formby to conduct hearing test on the hospital’s patients. Though the Clinic was initially started on a 6-month trial period, Kerriddge’s work was so beneficial that the hospital Committee decided to let her continue her research work and audiometer tests, extending care to private patients as well. They provided her with two more rooms in the basement, one as a waiting room and the other as an office, as well as the services of Miss W.J. Waddge as an assistant. In 1939, Kerridge viewed 170 cases, and according to the reports, her work among deaf patients was successful in helping many of them to be fitted properly for hearing aids.

Wartime of course, changed the course of things. The clinic was abandoned during World War II, but the hospital still provided hearing tests with the audiometer to test the hearing of patients suffering from “bomb blast.”