On my flight from Toronto to Phoenix last week, I passed the time by reading a series of letters from deaf persons sent to the American Medical Association during the 1930s. I collected the letters from a summer visit to the AMA archives but  never had the time to properly examine them. Most of the letters were addressed to Arthur J. Cramp, the director of the AMA’s Bureau of Investigation, and were simple inquiries about the fake deafness cures listed in Cramp’s Nostrums and Quackery. There were also letters from people inquiring an investigation into ear specialists or an advertised deafness cure, asking for confirmation that these “treatments” were indeed legitimate.

Then there was a 1931 letter from Mrs. J.A. Deegan of Yonkers, New York asking if airplane flights can cure deafness.

Actually, in the late 1920s and early 1930s, aviation stunts were perceived as a new “experiment” in restoring hearing. Airplane rides to 10,000 feet, nose dives and dips, and even parachute jumps were performed, often at the recommendation of ear specialists who believed changes in air pressure could cure deafness. Though little audiometric data was available to support the benefit of airplanes rides in restoring hearing or demonstrating any marked improvement before and after flights, such tales made for exciting news well into the 1950s. Adding the fact most accounts of “successful” rides were purely anecdotal, the American Medical Association denounced the “treatment” as futile and often fatal.

For instance, in 1928 at Springfield, Mass., three people were killed in a flight undertaken to cure deafness in a child who was born deaf. A more sensationalized story occurred in February 24, 1930, when welterweight boxer Fred “Dummy” Mahan plunged to his death in a 5,000 foot jump from an airplane in front of a crowd of several thousand persons. A deaf-mute since eight months old, Mahan had attempted the leap in an attempt to regain his hearing, but his parachute failed to open. 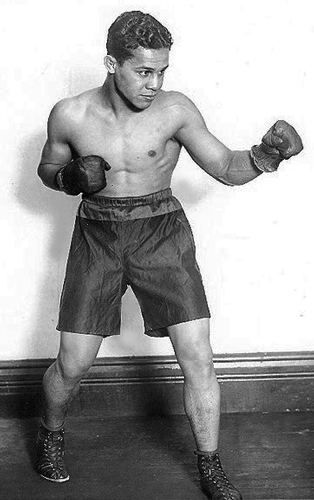 Fed up with sensationalized news stories and misinformation, Lieut. Col. Levy M. Hathaway, the chief medical officer of the Army Air Corps, declared that flying was not beneficial for deafness and actually incredibly harmful. Forget the risk of plane crashes; the noises of engines and rapidly changing atmospheric pressure could burst eardrums and dull the sense of hearing. There was no foundation for the idea that airplanes flights could cure deafness, Hathaway stressed. Indeed, defective hearing was actually an occupational hazard among aviators. The medical profession agreed with Hathaway, finding that there was no support for the utter folly of relieving deafness by aviation stunts. 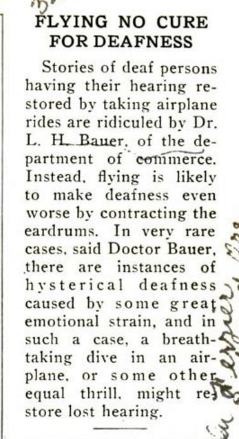 In his reply to Mrs. Deegan’s letter, Arthur Cramp pointed out that cases of deafness considered “purely psychological” might benefit from an airplane ride…but then again, “so may carrying the left hind foot of a rabbit that has been caught in the churchyard in the dark side of the moon!”