In the 1980s, historians began to refer to the “medical marketplace” as a mode 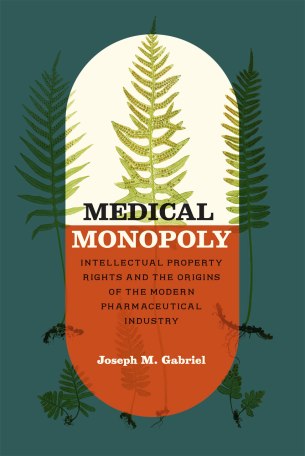 l for analyzing the experiences of health and illness. Adopting a normative understanding of the buying and selling of medicine, this model did much to shape historical discourse on the relations between health and consumerism. Using the language of economics, scholars evaluated how economic constraints, the pricing of goods, and financial competition juxtaposed the rise of prosperity among medical practitioners and a rapidly expanding medial economy within the dynamics of an unrestricted free market. In the nineteenth century, for example, as the entrepreneurial tradition of medical culture became marked by competitive individualism and plurality of knowledge and practice, the tradition was also checked and shaped by legislations for regulating medicine.

Patenting drugs, products, and technologies was perceived by medical entrepreneurs as a way to carve out an edge from competition. At the same time, patenting was perceived by medical elites as an antithesis to the gentlemanly image of the profession, the hallmarks of quackery. In Medical Monopoly, Joseph M. Gabriel investigates the history of patenting pharmaceuticals, tracing the deep rifts between the “patent medicine industry,” which manufactured goods with secret ingredients and plastered their miraculous benefits in adverts, and the “ethical segment” which shunned secrecy and advertised only to medical professionals. Patenting pharmaceuticals, once considered to be unethical and unscientific, became, by the mid-twentieth century, a foundation of highly complex scientific and technological networks. As Gabriel explains:

[T]he emergence of the modern pharmaceutical industry was both a cause and a function of a profound transformation in the ethical sensibilities of the physician and other actors toward medical patenting. Over the course of the late nineteenth and early twentieth centuries, what had once been the mark of unethical quackery was reinterpreted as an ethically legitimate component of scientific drug development. This transformation in values was an essential component of the corporate reconstruction of the American pharmaceutical industry and its subsequent growth in the decades following World War I (3).

Through six chapters, Gabriel shows how the process of therapeutic reform and the need for a scientific standards for governing distribution and use of pharmaceuticals were linked to the process of commercially developing remedies that would not offend or violate medical ethics. The very history of the pharmaceutical industry is connected to the process of therapeutic reform. Shifting attitudes towards patenting and trademarks, Gabriel argues, was a crucial part of this process.

The term “patent medicine” refers to therapeutic goods with imported ingredients that were supposedly protected by patents granted by the king of England. A growing number of manufactures in the early nineteenth-century began producing domestic therapeutic goods and selling them as “patent medicine,” even though there were not actually patented. The term stuck as a reference to medicines that contained secret ingredients. In examining the years of the early drug industry, Gabriel highlights the emergence of chemicals that became crucial ingredients in many drugs:  morphine (1804), strychnine (1818), piperine (1819), and quinine (1820). 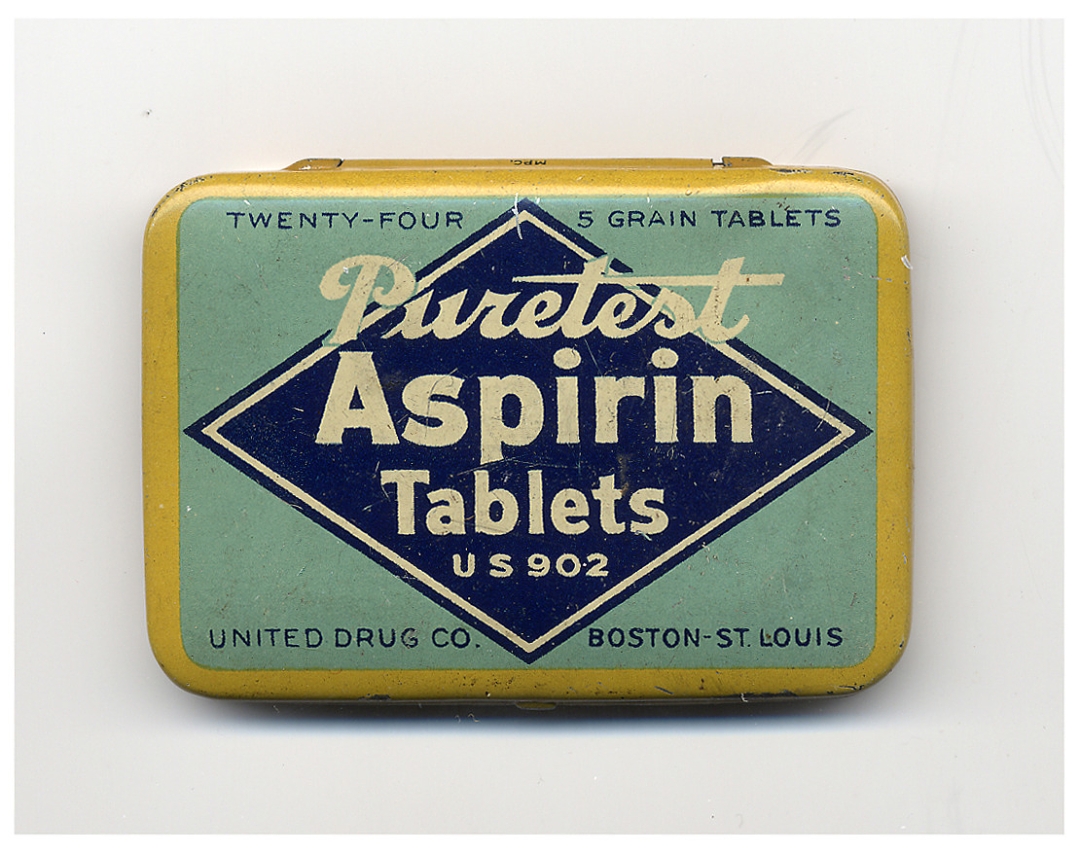 Secrecy afforded drug manufacturers a competitive advantage. But it could also be a double-edged sword. It restricted access to secret formulas from competitors, but it also meant competitors could claim legitimate ownership of a drug recipe; fraudulent claims could only be disproved by revealing the secret formula (23). Secrecy also became a way to pinpoint the quack practitioner. While medical science was ethical, driven by nobler motives and required a selfless rejection of personal gain, quackery was “characterized by its unscientific methods, its predatorial nature, and the greed of its practitioners” (25-26). For medical science to progress, it needed to eliminate the secrecy that threatened public good. Medical reformers thus denounced quackery and patented goods as a way to secure orthodox medicine within a vibrant drug market.

The post American Civil War medical landscape saw an emergence of a remarkable number of patented medical goods that were sensationalized advertised to the public. Manufacturers wanting to protect their investments and reputations of their brands invested in advertising and promotional activities. As Gabriel explains, the manufacturers’ brands were considered as something valuable and in need of protection, outlining the features of Trademark Law:

During the antebellum period, manufacturers thus had little ability to control the names of their products unless they also obtained a patent on them. Even the most highly designating names, including names that incorporated the personal name of the manufacturer, could legally be adopted by competitors if no patent rights were involved because of the deeply held assumptions that trademark infringement was fundamentally a problem of misrepresentation and that the names of goods were available for all to use (55).

Physicians, however, were not all strictly against patent medicine. Many prescribed popular patented drugs to their patients; others filled out prescriptions due to patient demands. Medical practitioners also lent their names to manufacturers, or penned testimonials for advertising. Others still created their own drugs to manufacture and sell, even taking out patents for commercial protection (58). The prohibition of patent medicines and other forms of medical monopoly thus became the central part of the American Medical Association’s Code of Ethics and standards for medical practice. However, Gabriel points out that “[t]his was not so much a transformation in ideas as a practical effort to improve therapeutics by enforcing the commitment to an antimonopoly stance” (59).

The problem with medical practitioners patenting therapeutic goods, however, was that it indicated private interest was more important the advancement of science. The ethical stance against monopoly received tremendous pressure during the 1870s. As Gabriel explains, numerous new remedies by physicians and pharmacists were introduced—and some were patented—before being thoroughly vetted, increasing debate in the medical community about ethics of their use. Yet, the changing therapeutic landscape afforded reasoning on how to best maintain an ethical stance while promoting manufacturing goods and pharmaceutical science, especially as medical practitioners, with greater frequency, were adopting drugs developed outside the purview of scientific scrutiny (85). The question of innovation and protection also perplexed the ethical manufacturers, who “recognized that the charge of quackery could severely damage their reputation among the orthodox medical community” (113).

The 1880s saw a number of reform laws directed towards controlling the therapeutic market while advancing the cause of scientific pharmaceuticals. Ethical manufactures even began innovating and introducing new drugs to the market before they had been adopted into the United States Pharmacopeia, the official compendium listing verified standards of drugs and drug ingredients. Even with the formation of permanent registries for trademarks and laws for trade, at least five thousand patent medicines still flourished in the market. Some were trademarked or patented (124). Many were promoted and lavishly advertised; alliterations in names was a common branding strategy.

Monopolizing the name of goods was an important approach for manufacturers to create brand identities. We even see this today, with national and international recognitions of particular brands as trustworthy. Gabriel argues,

Trademarks helped to ensure repetition of purchasing by linking the reputation of the manufacturer to the product at hand, thus helping to make possible economies of scale and the commercial exploitation of new technologies. Branding thus became increasingly important over the decade, as manufacturers increasingly relied on selling large numbers of goods at low cost and stimulating consumer desire for the acquisition of their products (154).

The relationship between names and things was a pivotal concern of therapeutic reformers, as brand identities and trademarks threatened fair competition and raised concerns about the efficacy of therapeutic products with similar drugs but sold under different names (i.e. “generic drugs”). The rise of generic names to new products was tied together to the trademarking of drugs: “Manufacturers also increasingly realized that giving their products distinct generic names might prevent their trademarked names from moving into the common domain at the expiration of their patent rights on the underlying goods, thus protecting their investment in developing a brand identity for their products” (245). 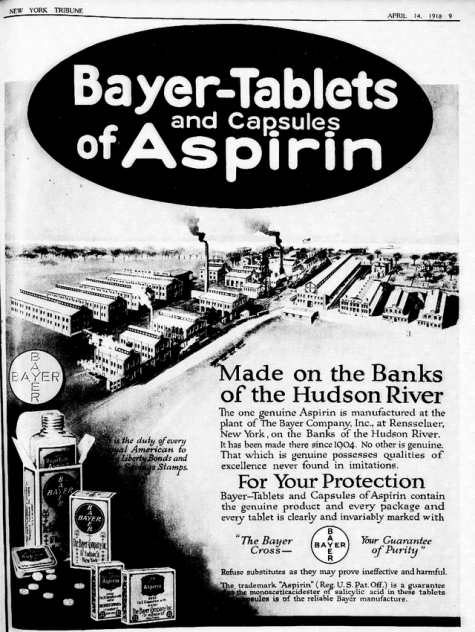 A 1918 advertisement for Bayer Aspirin in the New York Tribune. By this time, the aspirin patent had expired, but Bayer still had control over the Aspirin trademark. References to patriotism were used to sell US Liberty Bonds.
Library of Congress/Wikipedia Commons

As laboratory testing provided the basis for scientific knowledge about drug action, especially in the wake of new German synthetic drugs, testing added scientific validity. The truth of a drug’s efficacy could thus be tested and their physiological actions determined. Such process required new networks to emerge between scientists and lab clinicians, in order to cultivate expert knowledge and professional connections that built the foundation for the growing acceptance of patenting among the medical community.

Medical Monopoly is lavishly illustrated with numerous examples of the patenting processes, legal cases over monopoly or trademark infringements, and the emergence of new therapeutics. Accessible and clearly written, the book is an important contribution into historical discussions of the pharmaceutical industry, patented medicine, and especially the challenge of trademarks and generic drugs. Joseph Gabriel’s vivid analysis of the ethical conflicts within the medical community adds another dimension to the economics of the medical marketplace historiography. As well, his examination of patent medicines introduces a fresh narrative to dialogues on medical quackery.