This post includes a review of Cinemax’s The Knick and contains minor spoilers.

On arriving to Bellevue Hospital in New York in the 1880s, American surgeon Robert Morris (1857-1945) commented on the new surgical operating rooms at the institution:

[T]he operating room was similar to that of other large general hospitals. The set-up consisted of a plain wooden table to carry instruments, lint or oakum dressing, unbleached muslin bandages (we had no absorbent gauze or cotton), and a large tin basin of tap water. Sometimes plaster of paris and other splint outfit was added.[1] 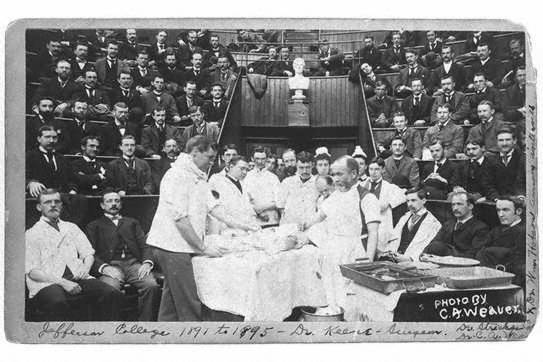 I’m utterly fascinated with the surgical operating theater and how it evolved from a simple room with minor equipment to a packed theatre stage, and eventually to the sterile and spacious environment of modern operating rooms. The transformation of the operating theatre mirrors many tremendous advancements in the surgery during the twentieth century, as surgeons became more skilled and innovative as they mastered complicated and dangerous procedures. It’s no surprise then that I was completely riveted by Cinemax’s new television series, The Knick, directed by Steven Soderbergh, written  by Jack Amiel and Michael Begler, and starting Clive Owen.

The show takes place in turn-of-the-century New York City, with Owen playing the anti-hero Dr. John Thackray, surgeon at the Knickerbocker Hospital. The pilot episode, “Method and Madness” brilliantly captures the dual nature of medicine: we see Thackray begging his nurse (Eve Hewson) to inject him with 22cc of cocaine, and a short time later, watch him order her to prepare a 2% solution as an innovative spinal anaesthetic to inject a patient on the operating table.

The show’s opening scene in the operating room is, in a word, gory, illustrating the difficulty of procedures that are considered as routine today. Bareknuckle surgery. 100 seconds to perform a caesarean section on a patient with haemorrhage in the womb. Brass hand cranks for suction. White aprons and rolled-up sleeves of street clothes. The rubber apron of Dr. Jules Christiansen (Matt Frewer), which could barely camouflage the surgeon’s hopelessness and despair over 12 unsuccessful caesarean operations. When the patient and baby die on the operating table, Christiansen turns to his audience and reminds them that surgery is about advancement: “It seems…it seems we are still lacking. I hope, if nothing else…this has been instructive for you all.”

During the early 19th century, operative surgery was limited to breakages, fractures, and amputations. Experimental operations to save the life of a patient were incredibly painful, gruesome, and, in many instances, unsuccessful. Two major advances during the mid-19th century would establish a foundation for surgeons to innovate new life-saving operations with greater confidence: the discovery of anaesthetics and the introduction of antiseptics. Analgesics were always made use of in medicine, as medical practitioners were aware of certain natural substances contained properties for relieving pain, such as opium or alcohol. During the 1790s, experiments of the effects of inhaling various gases and vapours first initiated the possibility pain relief could be achieved by inhalation of some suitable vapour or gas. Humphrey Davy (1778-1829) experimented with nitrous oxide (laughing gas), but other medical practitioners did not pay attention to his developments. The 1840s introduced ether as a more satisfactory anaesthetic, though chloroform anaesthesia became widespread as well after 1847 when James Young Simpson (1811-1870) first used it to relieve a patient’s difficult childbirth pains.

However, post-operative sepsis infection accounted for the majority patient deaths after major surgery. Antiseptics and antiseptic surgical methods became widespread with Joseph Lister’s (1828-1912) introduction of carbolic acid (phenol) as a method for eliminating bacteria on skin and on surface objects. The development of anaesthetics and antiseptics spearheaded the notion of a painless surgical operation. In the 1870s, towns with 10,000 residents had only 100 hospitals within their limits or nearby; by 1910, the number of hospitals increased to over 4,000, as new, innovative surgical procedures were became more successful.[2]

Even with anaesthetics and antiseptics, surgery was an incredible gruesome practice. Operations were performed either in patient wards, a small operating room, or in front of hundreds of students in the ordinary lecture theatre. We see this in The Knick, which surely benefited from the medical, historical and technical advice of Dr. Stanley Burns and the Burns Archive.

The scenes in the operating theatre appear to jump out of the incredible photographic collections housed at the Burns Archives. I found it difficult to get emotionally connected to characters, though the pilot episode did set up a solid foundation to explore their developments as well as the broader cultural strokes of America in the 1900s. Midwifery and “Stretcher Men;” divisions of the rich and poor; hospital administration; and of course, new technological developments like electricity being fitted in the Knick as it undergoes renovation. Dr. Algernon Edwards (Andre Holland) the “Negro” surgeon, gives us an interesting insight into America racial tensions, but I was more captivated with the scenes of the squalor and poverty of immigrants. The New York Public Health Board’s inspections of tuberculosis cases and their forced removal of sick persons, for instance, shows us how medicine was enforced in the legislative level, as laws outlined demands to enforce structural changes in housing to eradicate breeding grounds for disease. These scenes are a reminder of the terrifying cloud of disease and death.

You can watch the first episode here: http://youtu.be/ItBAXOEE8Vk