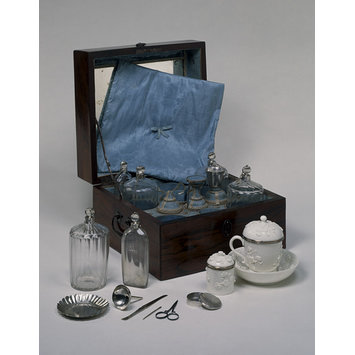 Cotton-wool has long been a staple in households as well as in the aural surgeon’s tool kit. For ear ailments, cotton was used in all sorts of ways: soaked in olive oil and inserted into the ear, trimmed and soaked in medicaments to cover a perforated eardrum, and even inserted between rubber to serve as a hearing aid. These days, the extent of our relationships between cotton and the ear is Q-tips®–most of us use these cotton swabs to clean out ear wax, risking the tremendous pain of stabbing our eardrums each and every time. We’re not supposed to use cotton swabs anymore, medical professions say, but that doesn’t really stop us, does it?

Did you know Q-tips® were invented in 1923 by Polish-born American Leo Gerstenzang (1892-1973)? He was inspired after watching his wife attach pieces of cotton to short sticks of wood to clean out hard-to-reach places. Gerstenzang founded a company, the Leo Gerstenzang Infant Novelty Company, which marketed baby care accessories; his cotton product was originally called Baby Gays. Yes, Baby Gays. By 1926, he changed the name to Q-tips® Baby Gays to identify the “quality” of the product. Eventually he changed the name again.

But Q-tips® were not the first technological product designed for cleaning out ears. Earwax was, and is, an annoying problem for most people. Too much of it not only feels gross, but can hamper hearing. How did people deal with this? Basic procedures: using the finger or small stick to clean out ear. If the earwax build-up was bad enough, a medical practitioner would recommend syringing with water or medicaments to weaken and drain out the earwax.

Ear Scoops, or Ear-picks were used for cleaning out the ear canal. People from all levels of society used these tools which were made from different types of materials. Some versions, however, were costly status symbols made for higher, fashionable living; they were made of gold or silver and intricately detailed. Some ear scoops were double-ended, with the other side for cleaning nails; others were a part of the splendour of toiletry, with a space reserved in toilet kits. 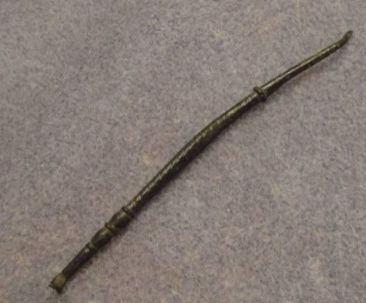 The British Museum has an amazing collection of ear picks. But really, anything–anything–was better than this: