A letter from W.W. Roffey to Edward Davis, the Honorary Dental Surgeon appointed to the Metropolitan Ear, Nose, & Throat Hospital:

Sir, I would like to invite your remarks in regard to the following.

On 25th..shortly before 2/30pm my wife attended the Ear & Throat Hospital, Grafton St., for the purpose of having two  teeth extracted by gas for which a fee of 2/6 was paid. The stumps in question were extracted but to her surprise & also my own two other teeth, one of which had been stopped & the other perfectly sound, were taken out as well.

This was not realised until after she had left the Hospital by which time it was too late for her return.

In addition to this fact I would also comment on an circumstance, although I cannot consider you responsible, i.e. she was allowed to leave the premises in such a condition that several handkerchiefs were absolutely soaked with blood by the time she reached home. As a matter of fact it was after 9pm (6hours after the extraction) before this could be stopped & then only with the aid of a Dr. She fainted through loss of blood after reaching home & caught a chill in consequence. Owing to this & the shock at finding 4 teeth had been extracted instead of 2 I have had her under a doctor’s care until a few days ago & even now she is very weak.

I think the facts of this case do not reflect very creditably upon those who are concerned & I should like to hear under what circumstances the additional teeth were removed. 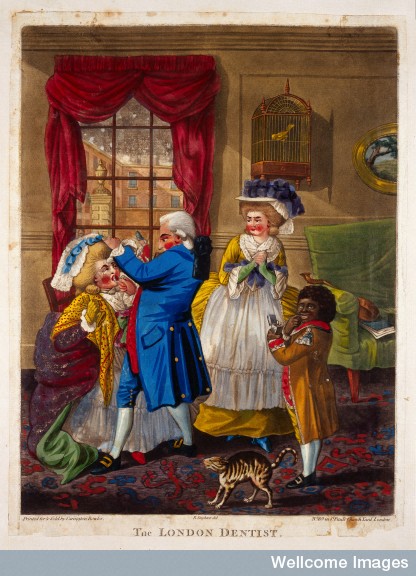 A London dentist extracting a tooth from a woman’s mouth; her female companion and the dentist’s black servant-boy (slave) are present. By Robert Dighton, c.1784