One of the lessons I try to get across to students in my History of Medicine class at Ryerson is how to “read” images and assess their value as source–i.e what kind of implicit or explicit meanings are embodied in the images and what kinds of messages are being transmitted, as well as how clearly these messages are being received, and so forth.

When we come across the topic of medical charlatanism in early modern Europe, I assign the students a small seminar assignment: go to Wellcome Images, and search through various images using the keywords “charlatan” or “quack.” There’s an incredible abundance of images that appear…and it’s always so fascinating listening to the depth of interpretations my students provide: the entertainment spectacle, showmanship, flamboyancy, brush of the exotic and foreign, obnoxiousness, and perhaps even annoying nature of these figures.

Charlatan with assistants, standing on table and addressing a crowd.
Miniature 15th century 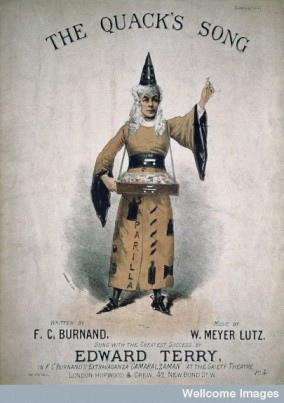 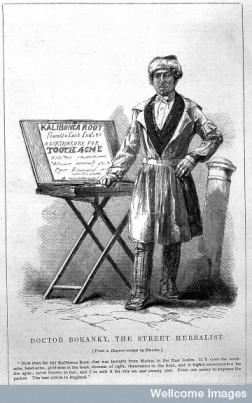 “Doctor Bokanky, street herbalist”: a quack selling a cure for tooth-ache in London, anon. after a daguerrotype by Beard.
Engraving circa 1851

If you’re interested in reading about the variety of healers who offered services for health care, here’s a short list of excellent sources to check out:

D. Gentilcore, From Bishop to Witch: The System of the Sacred in Early Modern Terra d’Otarnto (Manchester: Manchester University Press, 1992).

V. Nutton, “Healers in a Medical Market Place: Towards a Social History of Greco-Roman Medicine,” in A. Wear (ed.), Medicine in Society (Cambridge: Cambridge University Press, 1992), 15-58.