The Napoleonic Wars brought John Harrison Curtis’ studies to a standstill, as he became one of thousands of young men conscripted to fight against Napoleonic advances towards Britain. With his medical learning in hand, Curtis enlisted in the Royal Navy in 1808, to obtain his qualifications as surgeon and extend his medical skills. Since 1745, the Royal College of Surgeons in London, Edinburgh and Dublin, and the Navy held close associations with each other as the College was responsible for examining naval surgeons for active service. To be admitted as surgeon in the navy, candidates had to obtain a certificate of competence from the College and then be subjected to a two-hour oral examination at Somerset House.[1]  Certification did not automatically guarantee membership to the College, but in some cases it enabled candidates qualified for civilian practice once they were discharged.[2] According to the College Examination Books, Curtis took the exam at four different occasions: he was “referred” for further examination on February 5, 1808, and took two more exams on June 17 and December 16 of the same year. [3] He eventually obtained his qualifications on May 19, 1809, as Surgeon 5th Rate—the lowest rank, similar to an apprentice—in the Royal Navy and was immediately assigned as medical dispenser with the Navy Medical Staff.

After a brief stint at the depôt for French prisoners at Stapleton, Curtis was transferred to Haslar Hospital at Portsmouth, the navy’s most advanced and properly equipped hospital for officers and seamen. Built on a low-lying peninsula and dressed with Portland stone, the double block of buildings were raised three stories high, with two wings each measuring 560ft, making the hospital the largest brick building in Britain.[4] The quadrangle and hospital grounds were surrounded by a wall 12ft in height and guarded by the military patrol to deter desertion. The two wings contained 84 wards, each with its own water closet and washing area, a remarkable contribution to the antisepsis revolution in surgical wards. Only a fifth of the patients were admitted for surgical cases; the rest were treated for general medical complaints, including bronchitis, coughs, scurvy, typhus, and other ailments consistent with prolonged exposure to cold, damp air. Serving the Royal Navy from 1753, the institution was designed to accommodate 1,800 patients, but with an annual turnover of 9,000/year, the hospital was often overcrowded and poorly staffed.   A physician, two surgeons, a number of assistants and one dispenser staffed the hospital, although after 1795, the establishment included several more physicians, surgeons, surgeon’s mates, a number of administrative officers and assistants, and dispensers.[5] 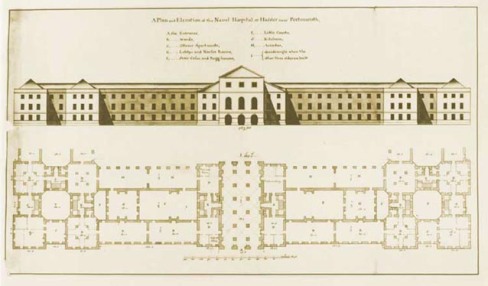 By the time Curtis was stationed at Haslar, army causalities from the Peninsular Campaign overflowed the wards, earning the hospital a reputation of exemplar military service. It also meant there were numerous medical and surgical cases for a young and earnest practitioner to observe, analyze, and treat; the navy, in other words, allowed opportunities for medical and surgical observations and experiments, which in peacetime would otherwise be difficult to proceed. The social disparities between physicians and surgeons still remained, however, and even in 1798 a well-trained doctor could be dismissive of a surgeon’s ability.[6] As Margarette Lincoln notes, until 1805, naval surgeons were licensed strictly for naval surgery, and held warrants, rather than commissions, as officers, and their rank and salary were subjected to mismanagement and poor payouts. Although some surgeons found eventual success in civilian practice, for the most part, many were subjected to dismissal at the end of the war and struggled to receive their pensions. Even though Curtis’ low ranking as a medical dispenser meant he apprenticed under surgeons at Haslar, he was placed on the half-pay list, and categorized as a doctor in the Navy, possibly referencing mismanagement of naval lists, or evidence of a promotion; either way, there’s little evidence of Curtis’ time at Haslar so it’s difficult to ascertain exactly what his role was as a medical dispenser apart from simply dispensing medicine.[7]

As a dispenser, Curtis obtained surgical and clinical expertise to serve him well in his later civilian work. The role of a medical dispenser was generally to make up medicines for a prescription written by a physician or by a surgeon; in some cases, surgical training enabled the dispenser to work as a surgical assistant, especially when the hospital was understaffed. Curtis’ medical education prior to commission was typical for prospective surgeons during the early nineteenth century: attendance at lectures at the teaching hospitals in London, in such establishments as St. Thomas’ and St. Bartholomew’s Hospitals, or in other private school, were sufficient for aptitude in a variety of surgical knowledge. Training in these wards were restricted to mere copying of case notes or observations of operations and surgical dressers; students were not required to perform operations, but had to attend courses of lectures on anatomy and surgery in order to demonstrate their proficiency.[8]

For the most part, the dispenser’s responsibilities were no different than that of the apothecary; anyone licensed by the Society of Apothecaries could prescribe for a patient, but only in naval hospitals were individuals called “dispensers” while everywhere else they were an “apothecary.”[9] The situation began to change during the late eighteenth century, as dispensers often served as assistants to physicians or surgeons, to the point that to avoid further confusion, in 1794 it was proposed that dispensers who also served as assistants would hereafter be titled “Medical Assistants” and be granted a salary of ₤100 per annum.[10] A further revision occurred in 1805 by an Order in Council, declaring all “Visiting Assistants,” “Assistant Surgeons,” and “Assisting Dispensers” were to be called “Hospital Mates” or “Surgeon Mates” and were to receive 6s. 6d. per day in full pay, and 2s. 0d. per day for half pay, and must qualify for hospital appointments by examination from the Royal College of Surgeons.[11] They also had to wear a distinguishing uniform though a new title and a new uniform could little to alter the rigid social class of Georgian Britain and the inferior social standing that dispensers were often placed amongst.[12]

One major attraction of naval service was the knowledge that once surgeons or surgeon mates were placed on half-pay and dismissed from their commission, they could set up a civilian practice without further examination from the Royal College of Surgeons, by virtue of their vast experience of medical practice than any civilian counterpart.[13] Curtis was commissioned as a dispenser at Haslar during the “hottest period of the…war, namely, after the battle of Trafalgar, and during the expedition to Walcheren.”[14] He had the ample opportunity to examine as many as 200 soldiers that were admitted within twenty-four hours as the troops arrived from Corunna, afflicted with pneumonia and dysentery, and many of them severely wounded. Many more were afflicted with classes of diseases peculiar to sailors and soldiers. Moreover, since medical officers at Haslar were prohibited from attending to private patients, their attention was mainly directed to surgical operations and to the numerous cases of diseases that came before them daily, a focus, Curtis noted, that contributed to the excellence of the hospital’s medical reputation as well as in its treatment of patients.

[3] Court of Examiners, 1809. The Archives of Royal College of Surgeons of England (with thanks to archivist Louise King).

[7] National Archives, Kew: ADM 45/31/650 (1853-1854), No. 650:  John Harrison Curtis, Doctor on Half Pay List, who died, 24 November 1852 (Notes on executor’s application for money owed by the Royal Navy). Anytime an officer applied for commission, warrant, or pension, the Navy pay office would issue a certificate confirming his qualifying service—this became the only evidence of a Navy register until at least the 1830s when official registers were introduced. Regulation to half-pay also dismissed commissions from the navy.

[13] Lloyd and Coulter, Medicine and the Navy 1200-1900: Volume IV, 21. Stricter regulations for qualifications for both naval and civilian practice did not occur until 1831 as the Order in Council required that all candidates should not only require a certificate of competency from the Royal Colleges of Surgeons of England, Edinburgh, or Dublin, or from the Faculty of Physicians and Surgeons of Glasgow, but must also undergo further examination from the Naval Medical Service (23).