In examining the relationship and conflict between the medical and social perceptions of deafness, I began to evaluate how certain medical practitioners strove to implement their medical expertise and authority upon educational institutions for the deaf. John Harrison Curtis was no exception to the growing body of aurists who attempted to increase their reputation with positions in established institutions during the nineteenth century. Roughly between 1817 and 1830, Curtis argued that an aurist needed to be a necessary—and permanent—fixture in institutions for the deaf, in particular, the London Asylum for the Deaf and Dumb.

The Asylum for the Support and Education of the Deaf and Dumb Children of the Poor was established in 1792 by Reverend John Townsend (1757-1826) of the Jamaica Row Congregation Church in Bermondsey, London. Townsend became acquainted with the plight of the deaf child when one of his parishioners, a Mrs. Creasey, sent her son to the Thomas Braidwood’s (1715-1806) academy for the deaf in Edinburgh. The boy’s ability and accuracy in mastering speech impressed Townsend, who then agreed with Mrs. Creasey on the necessity for a charitable institution that would counteract the privatization and expense characteristic of the Braidwood institutions. 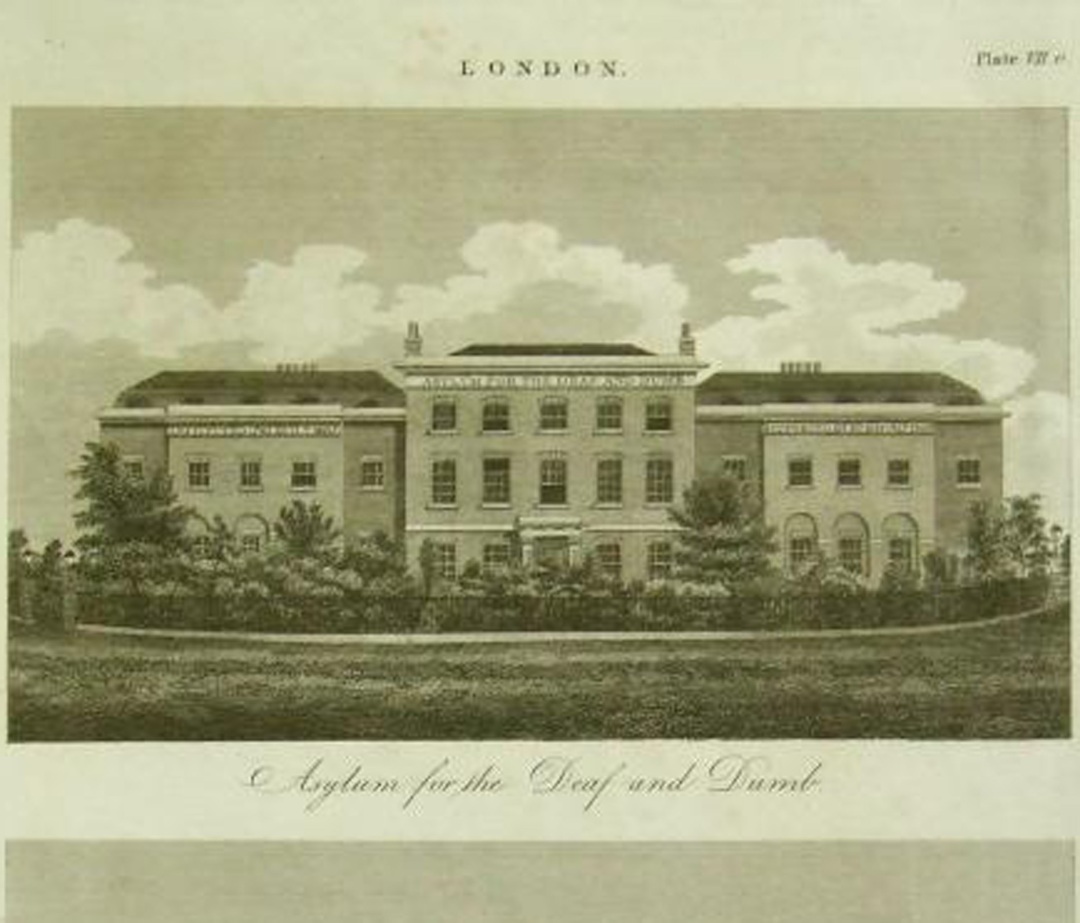 London Asylum for the Deaf and Dumb

With the support of Henry Cox Mason (c.1755-1804), rector of Bermondsey and the philanthropist and banker Henry Thornton (1760-1815), Townsend established the Asylum. Admission to the school was through a public selection process voted by the Committee of Governors of the Asylum, usually reserved for candidate between six to twelve years of age of “sound mind,” on the basis of their biographical sketch. Where six children were originally admitted in its founding year, at each yearly half-election, the governors of the Asylum accepted a few more; yet the number of children waiting to be admitted increased yearly, and by 1804, Townsend sought new dwellings for the growing institution. With the patronage from the Duke of Gloucester, the Asylum moved to Old Kent Road in London in 1807, and construction for the new institution completed in 1810. Braidwood’s dynasty in deaf education persisted as his nephew, Joseph Watson, served as the superintendent of the Asylum. Watson also published Instructions for the Deaf and Dumb (1809), which outlined the Asylum’s methods of education. Informally renamed the London Asylum for the Deaf and Dumb, the institution eventually became an important national charity and its model of patronage and governing committee did much to transform the operating systems of charitable institutions in Britain.

In its initial formation, the Asylum was designed solely to provide religious instruction and “the groundwork of an average fair education.”[*] Later, fuelled by a notion of self-sufficiency and an ethic stressing the importance of personal religious work which could be expressed through individuated diligence in labor[†] the Asylum incorporated trade training for its deaf pupils to acquire skills necessary for survival in society. Devoted to a philosophy centered on the “moral management” of the minds of its pupils, the goals of the Asylum were therefore to:

render them, according to their various capacities, conversable and intelligence, able to receive and express ideas; to furnish them with moral and religious information; and to lay open to them, in a considerable degree, the sources of intellectual enjoyment, common to rational and cultivated minds; by teaching them to understand the power and use of language; not a language of signs peculiar to themselves; but the common language of the country to which they belong, and which is spoken and written by those around them (original emphasis).[‡]

The results would thus elevate the children “from a dark and dreary state of ignorance,” and place them into an active participation and employment of society. The success of education at the Asylum led to a greater a recognition of the necessity for educating the deaf, resulting in a rapid expansion of institutions for the deaf in Britain. The various institutions that were established all over Britain grew out of the “secretive, private [and] individual initiatives…characterized by nepotism, philanthropy and compromise,”[§] of the Braidwood dynasty. Armed with a secular agenda nurturing a comprehension of Christianity, these institutions attempted to engage rational beings by teaching them their duties towards God and man, while at the same time preparing the young pupils for responsible adulthood.

During the early 1800s, Curtis observed a large number of poor children were entering the London Asylum without proper medical examinations, despite the presence of William Babington, the consulting physician at the Asylum. Clearly expressing his objective was not to interfere with the governance of the Asylum but merely to raise awareness against the marginalized state of the deaf and dumb in society, Curtis suggested that the social perception of deafness as “incurable and hopeless” created a prejudice against deaf children:

“It is remarkable how very common has been the error of considering a child once deaf always deaf and consequently of abandoning all attempts at relief.”[**]

I’ll stop the narrative here, as the post is getting too long. To be continued…